A brief history of the NBR 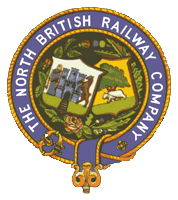 The first meeting of the promoters of a scheme to build a 57 mile railway linking Edinburgh with Berwick took place on 8 January 1842. Two years later, having secured the necessary finance, the North British Railway Company was incorporated and, on 4 July 1844, obtained an Act of Parliament authorising the construction of the line. Work began soon afterwards and the line was opened on 18 June 1846. The NBR was physically linked to the York, Newcastle & Berwick Railway on 29 August 1850, when the Royal Border Bridge at Berwick was opened. The NBR then became the Scottish part of the continuous east coast railway route from London to Edinburgh.

Headquartered in Edinburgh, Scotland’s capital city, the Company expanded rapidly after the 1846 opening and, following a series of amalgamations and take-overs, it became the largest of the Scottish railways by the mid-1860s. By that time, it had opened a number of branch lines, built a new main line from Edinburgh to Carlisle, taken over the Edinburgh, Perth & Dundee and Edinburgh & Glasgow Railway Companies, and absorbed numerous smaller railway operations. In the 1880s, it built the current Tay Bridge and the massive Forth Bridge (in a joint venture with its partner railway companies) and, by the end of the 19th century, it had built the West Highland Railway from Glasgow to Fort William. In fact, by the beginning of the 20th century, the Company’s rail services stretched from Newcastle to Aberdeen on the east and from Silloth in Cumbria to Fort William and Mallaig in the west. At the Grouping of UK railways in 1923, the NBR became a major constituent of the London & North Eastern Railway which, in turn, became part of the nationalised British Railways in 1948. In the 1960s many of the smaller ex-NBR branch lines were closed, together with the main line between Edinburgh and Carlisle (the Waverley Route). Britain’s railways were returned to the private sector in 1994, and today’s ex-NBR passenger railway system in Scotland is operated by ScotRail, together with other Companies providing cross-border passenger and freight services.